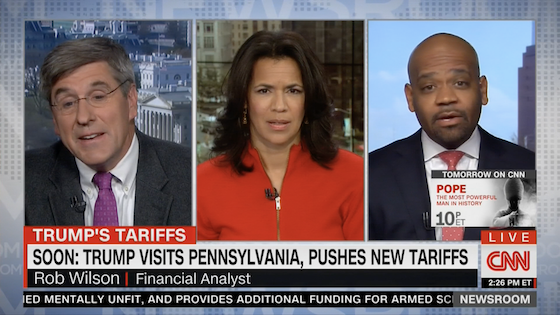 The President plans to levy tariffs on steel and aluminum, even though tariffs have previously been proven ineffective. So what’s really going on?

Look, there is perhaps no other place that has been hit harder by the decline of the steel industry than Pittsburgh and its surrounding areas.

And to be clear, I’m as Pittsburgh as it gets. I was born and raised there. I got my engineering degree from the University of Pittsburgh and my MBA from Carnegie Mellon. I built my business there. Our football team, and the best football team on the planet, is called the Steelers.

I’d love for my friends, family and neighbors to take care of themselves and their families with good, blue collar jobs in the area. But the reality is, most of those jobs aren’t coming back.

Yet, Pittsburgh has flourished because it decided to stop trying to hold on to the economy of the past, and made an intentional shift toward the economy of today and tomorrow by putting a focus on eds, meds and high technology.

Which is why the tariffs seem so misguided, since tariffs in general don’t work, and more specifically won’t do much to change the landscape of the steel industry in this country.

But the President has made empty promises like this before. He stood in front of a bunch on worried workers at a Carrier plant in Indiana, and insisted that he had “saved their jobs” by negotiationg a deal with the company. Then, Carrier STILL shipped the jobs to Mexico that it had planned to send there and it also took millions of dollars in handouts from the state.

Is that the art of the deal?

Why is Britain affecting US markets?

I had the exciting opportunity to share my thoughts with an international audience on CNN Newsroom with Fredricka Whitfield, where I engaged in a debate on this topic with former Trump economic adviser Stephen Moore.

Check out the video above for my thoughts on the tariffs and what we should really be doing for displaced workers in America.