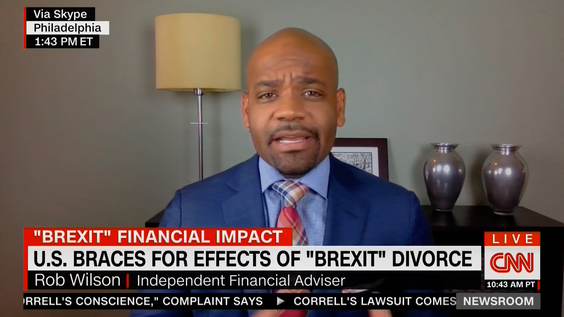 You may have never been to the UK, but what just happened there is affecting your money

Hopefully the first time you heard that word wasn’t last Friday when the Dow Jones tanked by 600 points and it suddenly dawned on you that your 401k was dropping too.

Just in case you still haven’t heard the word, Brexit is short for the British exit from the European Union, which was voted for by the citizens of Britain last week.

If world politics isn’t your thing, let’s just say that the Brexit is kinda like Pittsburgh football fans voting for the Steelers to leave the NFL…even though they still want the team to play in NFL games and compete for the Superbowl.

Not quite sure how that would work?

Well, investors aren’t sure how the Brexit is going to work either and when investors are faced with too much uncertainty they sell…everything and a lot of it.

Why is Britain affecting US markets?

We’re more interconnected than you think.

​​​​​​​The folks who pushed for the vote to leave the UK probably did so wearing an Italian suit, a tie from China, driving a car from Japan while eating French Fries.

Large countries all sell things to each other, buy things from each other, invest in each other’s markets, etc.

When something this huge happens abroad, the affect will inevitable trickle down to our investments at home.

I had the exciting opportunity to share my thoughts with the entire country on CNN Newsroom with Fredricka Whitfield.

Check out the video above for my thoughts on this event and what you should do with your money from here.