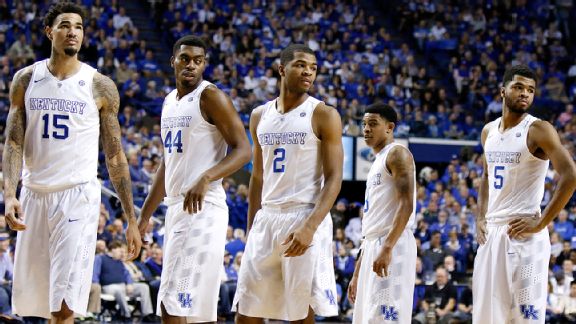 The Kentucky Wildcats have the opportunity to become the first team since the 1976 Indiana Hoosiers to win the NCAA basketball championship as an undefeated team, and I believe they should squander it. On purpose. Here’s why.

The NCAA, which could very easily stand for Never Cared About Athletes, stands to make an estimated $700 million from the TV rights for broadcasting “March Madness” this year. NCAA President Mark Emmert will earn roughly $1.7 million in 2015.

Uber drivers will earn “surge pricing” fees by shuttling tons of spectators between tournament games and their hotels.

The guys selling beer in the arenas the games are played in will make a few bucks.

The players? Well, they’ll get a few pats on the back and a chance to say ‘Hi Mom’ with millions of people watching, but as far as cash goes, they won’t be receiving any of that.

The NCAA has stated over and over again that so-called “student-athletes” are amateurs and it would be “utterly unacceptable” to compensate them for their efforts.

This lack of compensation is precisely why the University of Kentucky basketball players should refuse to play in this year’s NCAA Basketball Tournament. They’re being exploited.

I felt the same way last year after UConn star Shabazz Napier admitted that there were “nights he went to bed starving,” even though his coach makes $2.8 million per year.

If that’s the case, why not do something about it?

Mr. Napier could have leveraged the amazing platform he had of playing in the national championship by refusing to play in the game on the league’s biggest night in an effort to bring awareness to the shameful financial practices of the NCAA.

Alas, he played the game, earned Tournament MVP honors, and we had to settle for his comments in the locker room and the ensuing blogs and articles that came about from those comments.

If there was no game played because the players decided to take a stand, together, it certainly would have gotten the attention of the people that matter most: the people who pay money to the NCAA.

Sponsors who paid to advertise during the game would have been irate. Fans would have demanded refunds for their tickets, and their travel expenses. The facility would have sued the NCAA for loss of revenue, after people left without buying enough $12 hot-dogs.

These brave players would have finally forced the NCAA to act by hitting it in the only place that matters, the bank account.

The young men would have finally proven to every other Division I basketball and football player where the power truly lies.

See, without the players the NCAA has no product. Without the product, there is no advertising. Without advertising there is no money. And without money the huge salaries for coaches, athletic directors and administrators, all of whom never make one basket or score one touchdown, vanish into thin air.

Extremely absurd situations require extreme measures. It would have been a wonderful sight to see.

But it didn’t happen.

Now, the Kentucky Wildcats, who also played in last year’s championship game against UConn, are the number 1 overall seed and prohibitive favorite the reach the title game again and win it all.

They are currently undefeated and it would be a giant feat for them to run the table and win the championship.

Should they look the other way while the machine keeps running on the backs of the players who are forced by the NCAA to sign away the right to any financial benefit from the skills they have worked most of their lives to develop?

Should they allow the NCAA to make millions of dollars from restaurant sponsors only to be told that they will become ineligible to play if someone treats them to a meal at said sponsor’s restaurant?

Should they continue to accept the fact that their coach has a $52 million contract with their school while some of their fellow players around the NCAA have been suspended for signing $25 autographs?

Without a doubt, the Kentucky players have squarely in front of them a once-in-a-lifetime opportunity to make history.

Either way, the ball is now firmly in their court.