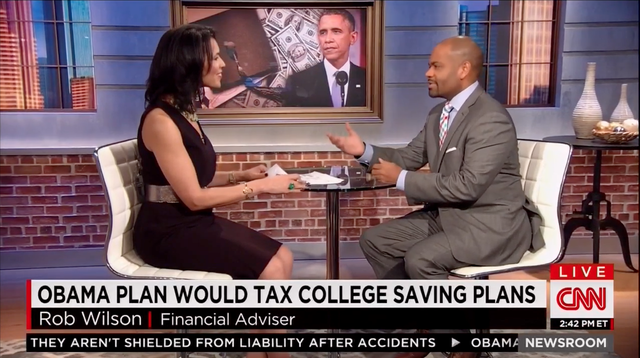 Many of you were quite taken aback when you heard about the President’s new plan to tax the gain in 529 education savings accounts, and understandably so.

If you’re like a number of my clients, you’ve been saving for your children’s education with the understanding that your withdrawals would be tax free as long as the proceeds were used for qualified education expenses.

So, to hear that the benefit may no longer apply, is a like getting punched in the gut.

But, before we get too upset, let me shed some light on his proposal.

The proposal is unlikely to pass

To get straight to the punchline, the proposal doesn’t stand a snowball’s chance in an oven of passing.

With a Republican controlled House and Senate there’s very, very little chance of this proposal passing, particularly since the move is aimed at the rich.  Which brings me to the next point:

The proposal isn’t about education, it’s about wealth inequality

The White House says that 70% of the balances in 529 plans are owned by families that make more than 200k, so most of the benefits of the tax break are going to wealthy families that do not need the break to send their kids to college.

Well, wealthy people like tax breaks, so sure, they have taken advantage of it too.  Ironically, the POTUS and FLOTUS contributed a total of $240,000 into 529 plans for their daughters in 2008. Clearly they understand the benefit of the plans for themselves and middle class families.

Seems like a little cutting off your nose to spite your face going on here.

In my opinion, what the president wants the conversation during his last two years in office to be focused on the success, or lack thereof, of middle class families.  And he seems to be succeeding.

When he can get conservatives like Rand Paul, Paul Ryan and Mitt “I found a way to stash $100 inside of a tax-deferred IRA account” Romney to acknowledge and discuss wealth inequality, I’d say he’s making good political moves by making them play on his home field.

Ultimately, benefit may be left for some

If the goal truly is for this proposal to go anywhere, there may be a compromise by putting an income limit on the tax break, similar to the limit put on the deduction of student loan interest.

Taxpayers can only deduct interest on their student loans if they earn less than $80,000 or $160,000 if married filing jointly.

It seems logical that if the President truly wants the middle class to get out from underneath the $1 Trillion in student debt they are carrying, he won’t take away the incentive to save your own money to pay for college.

The debate over this issue is surely not over, and I’ll be sure to update you as it progresses.  But, in my mind, the discussion really raises two important questions:

1) How can we address wealth inequality in a way that doesn’t simultaneously penalize the middle class and,

2) Why is there a seemingly sole focus on college as the means to a successful life? Should we expand our horizons give all of the new tools and technology available for learning in demand skills?