Have you ever dreamed of seeing yourself on the big screen, and the fame and fortune that might come along with it? It may seem like an impossible task to get noticed or “discovered” in tinsel town, but as it turns out, the fundamentals of success in entertainment aren’t that different from those in business.

In this episode, you’ll get to hear from star actor Lamman Rucker, a Pittsburgh native, who is perhaps best known for his role as Jill Scott’s love interest in the hit movies Why Did I Get Married and Why Did I get Married Too.

He was gracious enough to share with us the experiences that took him from the inner city to the big stage as a star in major film and television projects.

In this episode here’s what we’ll cover:

Bonus: Here’s a pic of an opportunity I had to catch up with Lamman when we both appeared on a news show in Pittsburgh 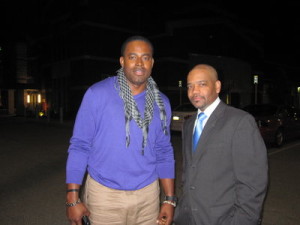 If you enjoyed this episode, subscribe to the show in iTunes so that you never miss another inspiring interview!

Question: What role would YOU like to play in Hollywood?