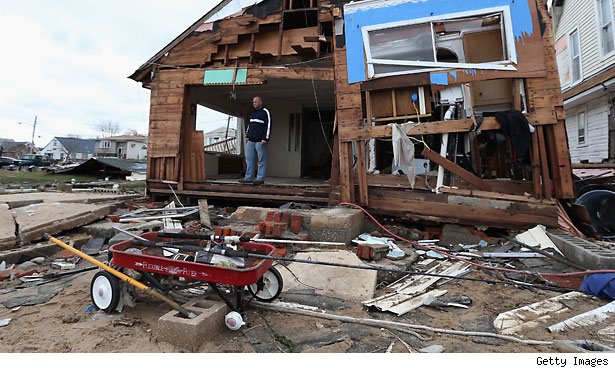 Here’s an article that I was quoted in with regards to using credit cards during a crisis like Superstorm Sandy:

A superstorm leaves a long-lasting impact on affected areas. Well after the news cycle slows and business begins to normalize, remnants of an event like Hurricane Sandy continue to reverberate in households and businesses.

According to the Chicago Tribune, the East Coast hurricane is estimated to be the fourth most expensive catastrophe in the U.S. behind Hurricane Katrina, the September 11th attacks and Hurricane Andrew. Totaling a predicted $70 billion in losses, Sandy will not soon be forgotten.

But as politically and economically charged as this weather phenomenon has been, few have begun to measure the personal cost. In terms of individual finances, the struggle that follows a storm of this magnitude can be incalculable in a time of grief and loss. However, the decisions made in the first few days following the crisis can determine whether survivors experience a swift recovery or a sluggish climb to stability.

From insurance claims, to purchasing the basic essentials for survival, costs can escalate quickly. In an ideal situation, Rob Wilson of RobWilson.tv recommends having three to six months of take-home pay to “lessen the blow of an event like this,” but admits that this isn’t always the reality of people’s savings balances.

Check out the full article at CreditCardSelect.com by clicking HERE.

Here’s a but more on the JP Morgan $2 Billion loss fiasco and how it could affect you even if you don’t do your banking there.

If you’ve ever wondered why I do what I do, here is a good example. Even superstars with Television shows are susceptible to financial problems.

It’s important to surround yourself with individuals that have your best interest in mind. Can’t get your advisor on the phone? Fire him immediately.

The recent ups and downs in the stock market would give even the best Snoop Dogg video dancer a run for her money.  Here’s how to make some sense of it.

The debt deal is finally done, but we’re still left to figure out what it all means. Here are my thoughts on what the financial situation means to you and your iPhone at the mid point of 2011 and what you should plan for.

Apple has more cash than US Treasury
http://bit.ly/neNrSI

For more financial goodness, join me on the interwebs!

Apple has more cash than US Treasury
http://bit.ly/neNrSI

Sorry, but Rep. Weiner has to resign.

Yes, I had to weigh in on this one.  Not because I childishly felt the need to be a part of the vast amount of Weiner jokes on the interwebs (ok, maybe I did a little), but because I’ve just kinda reached my breaking point with these politicians.

But let’s be clear from the start: this is not about sex, sexting or any other behavior that we don’t usually like to talk about in public.  The rhetorical question asking GEICO guy said it best, people use SMART phones to do really DUMB things.  I’m sure it’s just a matter of time before we find out what creative uses people have found for the FaceTime app on their iPad.  Now, I obviously can’t condone him engaging in those activities behind the back of his pregnant wife; but if she’s anything like Tiger’s wife, he’ll have to answer to her for that.

No, this is about lying.  Not the type of lying that you do when your girlfriend asks you if her dress makes her look fat.  Not even the type of lying where someone asks you something you weren’t ready for and you say “Huh?” to give yourself a few seconds to come up with something. No, this is the type of lying that is simply unacceptable from anyone, let alone an elected official.  Rep. Weiner lied not once (in this press conference), not twice (in this interview with Fox News), but at least three times to the American public when he lied to America’s granddad Wolf Blitzer on CNN saying “I know for a FACT that my account was hacked” and “I can definitively say that I did not send this (pic).”

Wow, now that’s lying.  I guess if you’re going to lie, you might as well go hard in the paint.  But again, it’s not what he lied about.  I’m willing to bet that most people, politician or not, wouldn’t want their latest texts displayed on CNN.com for all the world to see.  It’s about the fact that he had the…well…you know what (that joke is just too easy), to go on television and basically point his finger at the American public as if he was a McGwire-era baseball player swearing that he never used steroids and lie about what he had done.  The problem is, baseball players aren’t elected officials but Rep. Weiner is.

If we ever expect to get the country back on track, our elected officials MUST be held to a higher standard.  Personally, I believe that officials who are found to have lied to the public in this manner should be immediately removed from office.  Why should this be tolerated?  BYU suspended one of its basketball players for the season for breaking its honor code by having sex with his girlfriend.  What is the honor code that elected officials are governed by?  Do you mean to tell me that the BYU honor code is more strictly enforced than the oath of office for the House of Representatives? C’mon man!

Lying in politics has become way too cliche around here.  Wild Bill lied about the intern.  The Governator astutely waited until his reign was over to tell his wife that he had a love child.  But what takes the cake, and is m 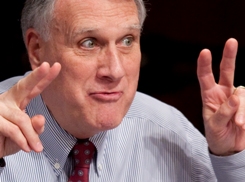 uch scarier than seeing these guys with their shirts off, is this guy, Senator John Kyl who stated ON THE SENATE FLOOR that “abortions are over 90% of what Planned Parenthood does” when it’s actually about 3% of what it does, and then responded to criticism by saying that it “was not intended to be a factual statement.” Huh? Really Jon?  The things you say on the Senate floor when making an argument about a position that you support are not meant to be factual?  Great, thank you for your service to America.

Seriously, these guys are playing us for fools.  If they will lie about these things, we have no idea what else they’ve lied about and will lie about in the future.  That’s why they all should resign or be removed immediately.  The relationship between a voter and an elected official is 100% based on trusting that the candidate believes in and will do what he says.

Once that trust has been breached, that relationship should be over.  “I’m sorry.  I was embarrassed.  I’m getting treatment.”  Those fake apologies just aren’t going to cut it anymore.  Can we take any of you seriously at a press conference, campaign rally or debate on the floor again?  No.

No Congressional hearing should be needed.  No tax payer money should be used for this.  It’s simple; “You lied…time for you to call Tyrone.  Sorry sir, but you’re not irreplaceable.”

When you add in the fact that many of the decisions that our elected officials are tasked with making directly affect your wallet, you should be calling for resignations too!  I mean, you won’t even let Uncle Jimmy borrow $20 because you know he can’t be trusted, but you’re willing to let confirmed liars vote on legislation worth billions of dollars? Please.

Wake up guys.  If you want things to get better, you’re going to have to hold these folks accountable. Yes, people make mistakes, but there are also consequences for those mistakes.  If a message isn’t sent at some point, we’ll be lied to forever and that’s not cool.  Ask Maria Shriver.

If you live in Rep. Weiner’s, Jon Kyl’s (although I believe he is retiring) or any other lying politician’s district please call for their resignations, or at the very least think long and hard (sheesh, no pun intended) about whether to vote for them in the next election.  It’s time to take a stand.

Now, if you’ll excuse me, it’s late and I have a FaceTime call coming in…..

Every so often I have to remind folks in sports and entertainment why they need a financial advisor.  Any questions?

If you are still not convinced, check out my earlier post on How and Why Athlete’s Go Broke.

Sure, you feel a little better about your money than you did last year…But did you learn anything from the crisis?

If not, listen up!

Wow! It all seems so surreal. It’s kind of like watching a bad (or any) episode of Flavor of Love; we’re just waiting for the next train wreck to happen. But unfortunately it’s not a dream, it is the living drama that is the Nightmare on Wall Street, 2008 edition.

If I told you last year at this time that the following organizations would cease to exist as we know them: Countrywide, Bear Stearns, Indy Mac Bank, Washington Mutual, Fannie Mae, Freddie Mac, AIG, Lehman Brothers and Wachovia you probably would have thought I was a St. Lunatic. As it turns out, that is exactly what happened and now a gaggle of formerly high flying investment bankers have gambled their way out of their jobs. Looks like there will be a flood of applications for I Want to Work for Diddy, Season 2.