This is almost a follow up to the SI article I posted.  Yes, you need advice, but you have to get it from the right person.  Do your due dilligence.  This cat wasn’t even licensed!  Guys like him make it hard for guys like me that do things the right way.

The view from the pool deck at Arizona businessman Phillip A. Kenner’s multi-million dollar hideaway in Cabo San Lucas, Mexico.

Former NHL star Joe Juneau and other players allegedly have been defrauded out of as much as $20 million by financial adviser Kenner (below) and associates.

An unlicensed financial adviser who bills himself as a “lifestyle coach” scammed several NHL players out of millions of dollars, according to sources familiar with the case and a lawsuit filed by former NHL star Joe Juneau.

In case you were wondering why I’ve chosen to work with professional athletes, this article from Sports Illustrated makes it pretty clear.

My goal: To make sure none of my clients end up in an article like this!

How (and Why) Athletes Go Broke

Recession or no recession, many NFL, NBA and Major League Baseball players have a penchant for losing most or all of their money. It doesn’t matter how much they make. And the ways they blow it are strikingly similar.

…What happens to many athletes and their money is indeed hard to believe. In this month alone Saints alltime leading rusher Deuce McAllister filed for bankruptcy protection for the Jackson, Miss., car dealership he owns; Panthers receiver Muhsin Muhammad put his mansion in Charlotte up for sale on eBay a month after news broke that his entertainment company was being sued by Wachovia Bank for overdue credit-card payments; and penniless former NFL running back Travis Henry was jailed for nonpayment of child support.

In a less public way, other athletes from the nation’s three biggest and most profitable leagues—the NBA, NFL and Major League Baseball—are suffering from a financial pandemic. Although salaries have risen steadily during the last three decades, reports from a host of sources (athletes, players’ associations, agents and financial advisers) indicate that:

• By the time they have been retired for two years, 78% of former NFL players have gone bankrupt or are under financial stress because of joblessness or divorce.

• Within five years of retirement, an estimated 60% of former NBA players are broke.

• Numerous retired MLB players have been similarly ruined, and the current economic crisis is taking a toll on some active players as well. Last month 10 current and former big leaguers—including outfielders Johnny Damon of the Yankees and Jacoby Ellsbury of the Red Sox and pitchers Mike Pelfrey of the Mets and Scott Eyre of the Phillies—discovered that at least some of their money is tied up in the $8 billion fraud allegedly perpetrated by Texas financier Robert Allen Stanford. Pelfrey told the New York Post that 99% of his fortune is frozen; Eyre admitted last month that he was broke, and the team quickly agreed to advance a portion of his $2 million salary.

Ladies, this one is for you.  Women have unique challenges when it comes to money; Here’s how to deal with them.

Julia Beverly talks about taking risks to get to the top

Boy, February was a doozy.  There was so much fear all around.  Fear that your bank was going to be shut down and the stock market was going to zero.  February actually had a Friday the 13th, and Hollywood conveniently released a new Jason Movie.  I even watched the last Saw movie on the way back to Pittsburgh from a business meeting (did you know the Escalade is like a house on wheels?).  All of that got me to thinking about how afraid people are to take risks in life.  I don’t mean taking a risk like buying a house with an adjustable rate mortgage and praying that you’ll be able the make the payment when the rate adjusts higher.  No, that’s just, well…stupid.  I mean taking the type of calculated risks that can get you closer to living the type of life that you want to live.

A lot of us get paralyzed by what we don’t know.  I remember not wanting to play paintball for the first time the day before my friend’s wedding because I wasn’t sure how it was going to feel taking one of those pellets to my shoulder blade.  But once I took the first hit and got through it, suddenly I turned into Dick Cheney and I had a helluva time.  No, the point is not that it’s fun to shoot your friends (although it is, especially if they owe you money).  The point is that by not taking risks, you are actually taking a risk…that you might miss out on something big.

Picture this; you are a young white woman primarily skilled as a photographer.  You have no experience in publishing.  You wouldn’t describe yourself as a natural salesperson.  You don’t live in New York.  Does that sound like a resume built for starting a Hip Hop Magazine?  Nope.  But that didn’t stop Julia Beverly from starting Ozone Magazine.  I caught up with Julia in Hotlanta and I gathered a few nuggets that you could use to help you take that risk on your next (or first) venture.

END_OF_DOCUMENT_TOKEN_TO_BE_REPLACED

I spoke about saving money the day after Christmas, but this time I give specific tips on areas of your budget that can be sliced and diced to help your cash flow.

I took my “Relationships and Money” tips to TV on the KDKA morning news. 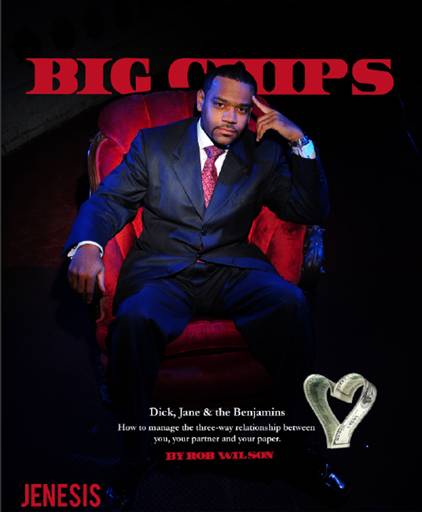 Dick, Jane and the Benjamins

How to manage the three way relationship between you, your partner and your paper

Since this Valentine’s Day is coming smack dab in the middle of a financial crisis and a recession, it got me to thinking; How are relationships holding up amidst all of this mess?

Money is the root of all evil, and it also seems to be the cause of many breakups.In fact, one of the most often cited reasons for problems in a marriage is disagreements about finances.Combine that with the fact that marital problems are one of the top causes for personal bankruptcy filings and you can see how a bad relationship can quickly send you to the poor house.

See, when two people decide to go for a ride, money seems to always call shotgun.Even worse, money is like the ex that your current mate keeps comparing you too.Only this ex comes around every two weeks, stays for dinner, and periodically instigates a fight between the two of you.

With a little help from yours truly, you can have a great V-day and beyond without letting the greenback come between you and your red light special.

It surprises me how much easier it seems for people to talk about sex than it is to talk about money.How can money be the more taboo topic?Fellas, if it’s okay for you to ask her what her favorite position is, surely she shouldn’t be afraid to ask you what your credit score is, right?Oh, and ladies it goes both ways.If size matters, it must be okay for him to ask about the size of your retirement account, correct?If you don’t learn to talk about money issues voluntarily, believe me, eventually they will come out on their own.

END_OF_DOCUMENT_TOKEN_TO_BE_REPLACED

You have my permission to spend money on your Super Bowl Party today!  Come on, we have a sixth championship to celebrate!

Lots of people don’t buy insurance because they don’t understand it and/or don’t know why they need it.  Well, do you think that any of these people thought that they would end up in the Hudson River when they got up that morning?

Would your spouse be able to take care of the family, send the kids to college etc., if suddenly you weren’t coming home?  You never know what is around the corner, but you can protect your loved ones should something unexpectedly happen to you by having a life insurance policy.

I’m glad this turned out for the best.

Wow, NBC really has some cohones!  They had the nerve to have MATT MILLEN on their playoff edition of Football Night in America.  For those of you that don’t know, until he was recently fired he was the GM of the Detroit Lions who just completed the WORST SEASON IN NFL HISTORY by going 0-16.  Further, just to prove that this year wasn’t a fluke, he led them to the worst 8-year record in the NFL since WWII at 31-97.

It might not be so bad if they brought him on just to make fun of him and his overall GUMPNESS as a GM.  But no….right after Dan Patrick gets Matt to say that he would have fired himself (who admits to that?) ….he asks him for analysis on how Arizona can win their game against Atlanta in a segment called…get this…The Winning Formula!  How can a guy from a WINLESS team comment on anyone’s WINNING formula? Come on people.

If that’s the case, I might as well get in on the act.  Here are my new show ideas:

You really have to be careful who you listen to.  You have to consider the source.  I am not suggesting that someone must be perfect to give advice or to do interviews, but this is just ridiculous.

So…….Who are you taking advice from?